About the Huntsville Alabama Anime Society

A History of HAAS

A long time ago, in a city called Huntsville, otaku existed. No one is quite sure who was the first to claim the honor, and in fact, no one is quite sure just exactly why someone would claim it anyway. But regardless, there are otaku in Huntsville. That is quite clearly established. Now, otaku are people that really like, or perhaps even love, anime. Japanese animation. they may like other things that are related to anime, like fan fiction, or dressing up in (anime and video game) costumes, and whole bunch of other stuff.

Moving on! Pants. I mean otaku. Okay, normally, it might seem that otaku are solitary creatures. This is not so. Otaku in fact like company very much, like all other humanoid-type creatures. However, many otaku are also branded as geeks and nerds (which granted are more often than not true), which doesnâ€™t exactly help with oneâ€™s popularity. That whole not socially accepted aspect tends to hurt one’s ability to be social. Now, many otaku like to meet other people, especially other people who like anime. That whole being interested in the same stuff thang, I hear. So, the idea of a club started. That way, they would all have a place and a time to meet, and would also feel obligated to go again since its like a club and stuff. So, the idea of an anime club began, separately and in the minds of many otaku at different times. Of course, the trick is to actually start that club up. Apparently another otaku tendency is laziness. However, a club did start. One noble otaku did take the plunge. This man is Alex White. He set it up with this really cool guy named Craig, who owned this really cool comic shop called the Comic Corner, and I have no doubt that he agreed to Alexâ€™s idea of an anime club in a very cool way. So, a starting meeting date was set, and people came. This was very cool. This happened as far as I can tell (based on the original email list which was I believe created the same night as the first meeting) on January 14, 2000. And at the first meeting, it became known as HAAS aka the Huntsville Anime Society1.

And while Comic Corner, in its infinite coolness had ceased to be, HAAS was then sponsored by Rocket City Collectibles, which was the same exact thing as Comic Corner, but with a classier name and two guys which make Craig look like an active volcano. These guys were Chris and Mark. After a long co-conspiracy name, HAAS then moved to The DeeP.

And The DeeP is awesome in its own right, we assure you wholeheartedly. After a while, however, we felt called to move our meetings back to Saturday nights and found a new home at Haven Comics, where we resided for a good long while!

But then weÂ decidedÂ we wanted Friday nights and more southern flavor, so we moved down to The Foundry, where we reside to this day.

1A few other names were tossed about, like BAKA (Bad Ass Kickin’ Anime) and ASS (Anime Super Society). HAAS just seemed to be the most socially acceptable option. 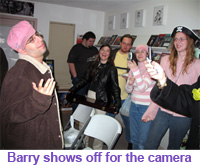 The Nature of HAAS

HAAS, by the very nature of its name, is a group of people who watch anime as a group, who just happen to meet in Huntsville, Alabama. This was for the sake of convenience. Anyway, not only do we watch anime, but we do other stuff as well, like monthly video game tournaments and occasional table-top role-playing. Though in everything we do we try to keep an anime theme to it, because, well, anime is in the name. We arenâ€™t the Huntsville Alabama Anime and a lot of other stuff Society, after all.

HAAS started with maybe around say, five to ten people sitting around a small television. We now number closer to between 30-50 folks watching a big movie-style screen, in 5.1 surround-sound. Weâ€™ve grown. Weâ€™ve gone from a slap job web page because one day one of our presidents got tired of one guy constantly waiting for another guy to hurry up and do something, to what you see today in all itâ€™s splendor. Our members have done things from steal artist tables to show off their own stuff (which rocks… Their stuff I mean, not stealing tables) to getting Dom and Largo (rememberÂ those guys? No? Oh…) to sign their bras. (Yes, those were HAAS gals , baby). Actually, some of them are the same girls. Go fig, huh? A few have gotten themselves up some kickingâ€™ web comics. Sadly they are no longer with us (the comics, I mean) Also, several cosplay, others make AMVs, others draw, others still make beatz and spit upon microphones to generate nerdy raps. Others, even a podcast! And at 10 years old, this is still just the beginning. We are shaping up to be one of the best anime societies up there, and we arenâ€™t going to be stopping anytime soon.

The Meeting Place of HAAS 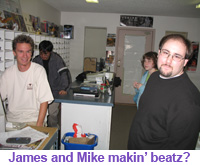 We meet at The Foundry, off South Memorial Parkway in beautiful and scenic Huntsville, AL.

The Joining of HAAS

So you want to join the Huntsville Alabama Anime Society! GREAT! For starters you have to attend at least one meeting in the flesh. No returns, substitutions, or refunds! After that you have two choices… Besides giving us your soul, anyway:

Attendee: All you have to show up and watch anime. However you arenâ€™t really a HAAS member. To that you must become a…

Member: This is where the fun is. The cost is $6 a month, or you can save twelve bucks by opting for the one-year membership at $60. Now, of course it would be silly if you just gave the money and got nothing back (besides keeping HAAS existing, and enabling us to buy nifty things like projectors and large screens). First off you get a nifty membership card, which just looks neat (and is pretty popular as soon as I sign them up Iâ€™m hounded for the darn things :P). Also, there are events like HAAS Xtra, which only Members may attend. 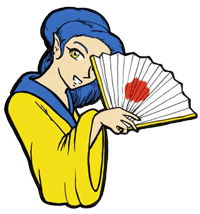 Who is the jerk writing this?

Protip: The original HAAS logo, featuring our Mascot Aya, is done by Sooz. A kitsune, she tends to have pointy (sometimes somewhat fuzzy) ears and yellow eyes topped with blue hair. Additional Ayas have also been designed by Umitsu, Karisa, Neil, Halley, Akkhima, and I’m pretty sure a bunch more folks that I’ve forgotten about.